Swarovski Crystals: How do they do it?! 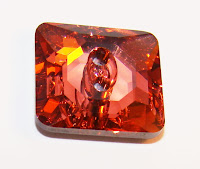 I have often wondered how new colors make it into the swarovski repertoire. When I first heard of the color, padparadscha, from a fellow beader and former craft show partner, I honestly thought she either mangled the correct word for this orangy-pinkish color or she was making something up.

She showed me a piece of jewelry she had made using padparadscha bicones during a craft show and I must have asked her to pronounce it 20 times out of disbelief. I had never heard of such a word or such a color!! That was before the days of everyone having the internet on their phones, so I had to wait until I got home from the craft show to look it up.

Sure enough, padparadscha (with a couple of "d's" in it) was a real word!! Crazy! I love things that temporarily boggle the mind. Until this week, the only padparadscha swarovski crystal I had worked with was the bicone.

I was recently inspired by Lillian Chen's work that was featured here in May and have been wanting to try creating a swarovski masterpiece ring even though I don't have any idea how she makes them! 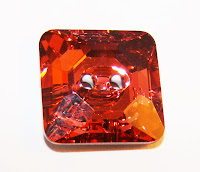 This padparadscha button was part of my Rings & Things catalog selections in Tuesday's photograph. I had the urge to find out more about this color not only for myself, but so I could share it with all of you too!

I just had to include a link here to wikipedia. The word, padparadscha, comes from the Sinhalese word for lotus blossom. This is a common language spoken in Sri Lanka. There is an actual rare cut padparadscha sapphire stone on wikipedia that looks just like the swarovski button!! That leaves me here repeating this question, "Swarovski: how do they do it?". It makes me want to make up a new word, like "fab-war-ovski". I think the definition would be "the most fabulous swarovski crystal you can find". For today, it is this swarovski button!!

Thanks so much for joining me here each day to admire and appreciate the "little" sparkly things that make life so much prettier!

Update: The padparadscha button project has been completed, it was so fun to create a "scuplture" with swaroski elements!
Posted by Lisa Crone at 9:13 PM

Wow ... I'll never be able to pronounce that, but it is a beautiful color! TFS!

I often wondered about that particular Swarovski name...lovely color though!
Cheers

- Hi Lisa, LOL, it doesn't help any that 'padparadscha' (already hard to type) is spelled in a German way. Wow! I'll take 'fab-war-ovski' any day :)

First time i have seen it, but lovely! I am all about orange most days!!

Hey Dave! How funny! Thanks for oh so subtly pointing out my mis-spelling. I'm fixing it up now. :)

Wow - that's really cool and something I never knew! Lovely color :) Thanks for stopping by my blog and the comment you left on my bracelet!

That is one gorgeous button.

The padparadscha swarovski is so much more affordable than the real sapphire...and just as pretty! 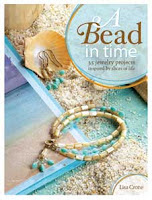